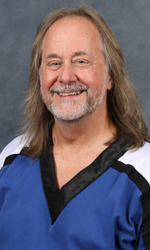 Chief instructor Ricky Lockhart, a 7th degree black belt, has been in the martial arts since 1967.

He is among a group considered to be the first one hundred black belts in Georgia.

He has been teaching martial arts in Rome since 1973.

As a competitor Mr. Lockhart has won hundreds of awards, and at one time was the number one ranked fighter and forms competitor in the southeast region of the National Black Belt League.

As a teacher, Mr. Lockhart’s students are some of the best, with three national champions and one ranked second in the world. Mr. Lockhart has had three students to make team USA and they competed in Spain, Italy, Switzerland, and Russia.

Mr. Lockhart has dedicated his life to try to help his students be their best and to take the confidence, discipline, and respect from the martial arts and apply it to their daily lives.